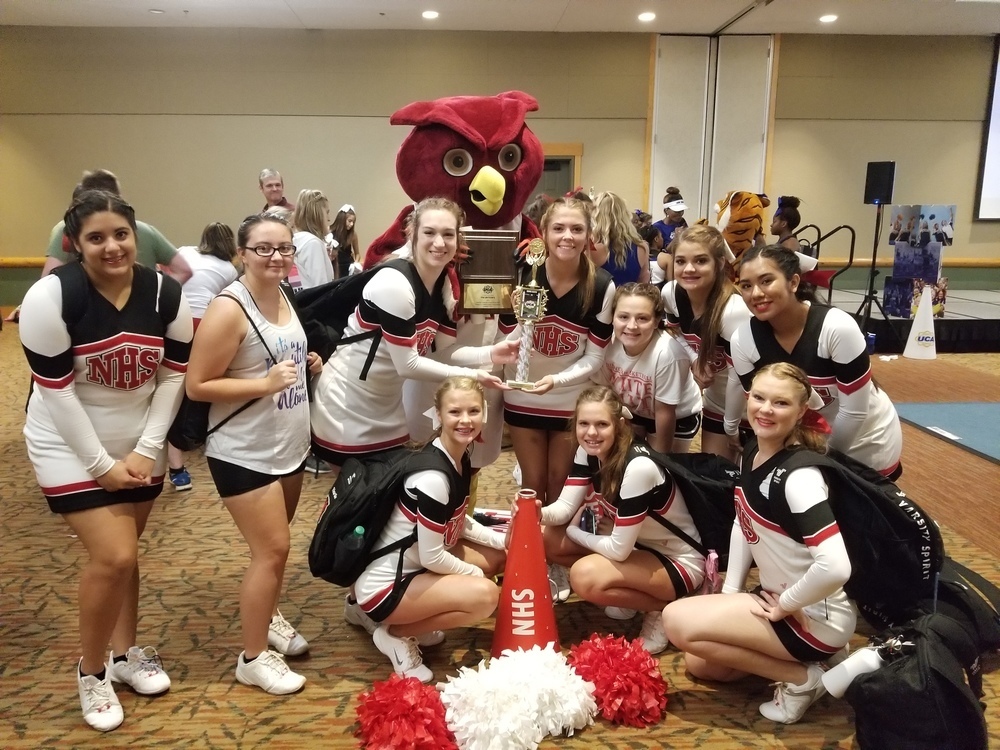 The Ninnekah High School cheerleading squad and mascot had a successful week at  Universal Cheerleading Association (UCA) camp at Great Wolf Lodge in Grapevine, Texas July 19-22. The squad, and its individual members, came home with many awards for their performances and attitude throughout the week.

On the final day of camp the squad competed in a competition showcasing the cheers and dances they learned during camp. The squad earned 2nd place in the pep rally dance division. In addition to the trophy, the squad also earned two spirit sticks for remaining positive and spirited during the learning process.

Senior, Payton Wright, was awarded a pin it forward award for standing out among her peers as someone who had a positive attitude, led her squad, and encouraged those around her. Wright and fellow senior, Bailee Martin have the opportunity to participate in the Varsity Spirit Spectacular in Orlando, Florida the first weekend in December.

A mascot camp ran simultaneously with the cheer camp, and Eddie the Owl received two blue superior ratings and one gold superior for his in class performances. He also earned the very first spirit stick for the entire camp. On the last day, Eddie received the Traditions Award for being an outstanding leader both on and off the court.

During the camp, Eddie participated in the UCA All American Mascot Competition. For the competition, he had to present a 1:30 skit to music in front of 250 cheerleaders and their coaches, as well as five judges from the UCA staff. For his performance, Eddie earned All American Mascot honors for the second year, and has the opportunity to join other UCA All American mascots and cheerleaders in a pregame performance at the Buffalo Wild Wings Citrus Bowl in Orlando, Florida over Christmas Break.