The 2022 Ninnekah School Board Members are: 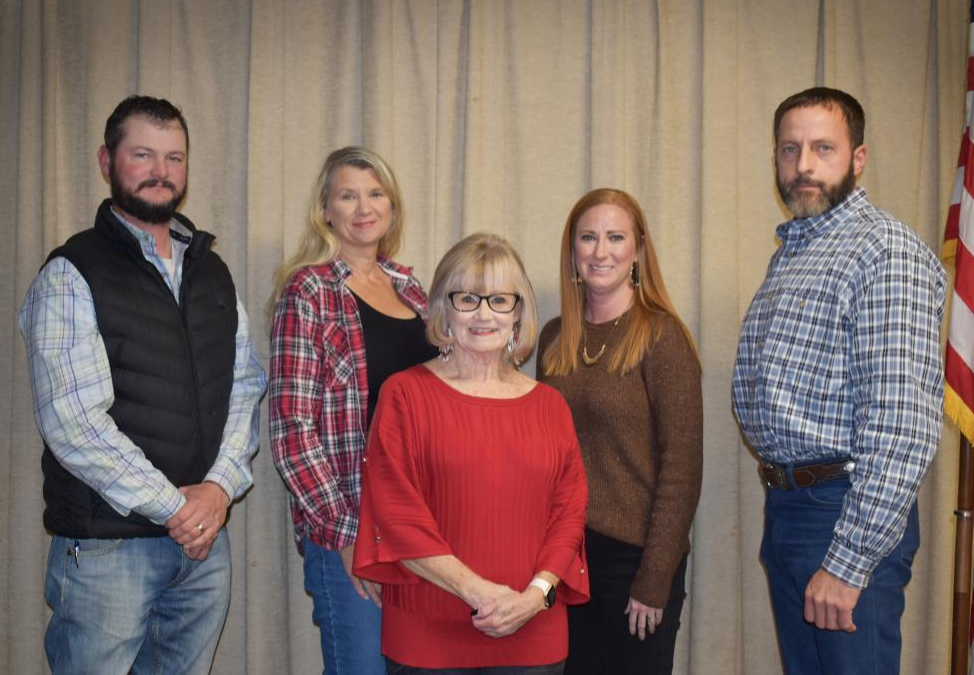 Meet our School Board Members:

Brock Perryman - Mr. Perryman has recently joined the Board of Ninnekah Public Schools. His children attend Ninnekah Schools and so when he saw that there was a chance for him to become more involved, he sought out the position. In addition to being on the School Board, he represents District No. 7 on the Water Board on which he serves as President. During his term he would like to create a good, safe, learning environment at Ninnekah Schools. He prioritizes safety, curriculum, and more student involvement in extracurricular activities. What he appreciates the most about Ninnekah Schools is the people and the way they all work together towards a common goal.

Adrienne Wenzel - Mrs. Wenzel is a proud Ninnekah alumna and has lived in Ninnekah all her life. Mrs. Wenzel is very involved in her church, volunteering there whenever she can. In addition to supporting the school through her involvement in her children's classes. Wenzel decided to seek the open seat due to her belief that it was imperative to move the school forward in a positive direction. During her term Mrs. Wenzel hopes to accomplish as much as she can by improving our students' curriculum, Ninnekah's Special Education program and boosting the overall morale of Ninnekah's students. Mrs. Wenzel also feels that it is key that the board find a permanent Superintendent that is a right fit as well. Ninnekah is her home because she loves the small-town feel and believes our citizens have the best interests of the school and community at heart.

Delaney Berry - Mrs. Berry is a passionate member of our school board. She joined the board in hopes of bringing new ideas and opportunities to Ninnekah Schools. One of her main priorities she would like to apply would be to really make students aware of options for their future. She recognizes that not all kids will be going to college and we should make them aware of what their other options are after they leave high school. Mrs. Berry also volunteers in our school's FFA and is a member of the Ninnekah Baptist church. She believes strongly that the kids are the future of our community and we should support them as much as we can. She loves the community and the community feel of Ninnekah and wants others to get involved in supporting not just the community but Ninnekah school as well.

Diane Carrol - Mrs. Carrol is very involved in the school helping out at the Christmas store every year. She chose to run as a board member because she truly cares for all the students and teachers at Ninnekah Schools, and she wants to do the best she can. She is involved in the Chickasha food pantry but it still helps the Ninnekah community. When she is needed in any area at Ninnekah she will be glad to help. The main thing she wants to accomplish for the school is for the community to work together towards the betterment of our students' education. She also believes that the students at Ninnekah should have a safe learning environment, and always know they can talk to their teachers and staff comfortably. Mrs. Carrol believes that the main facet that needs improvement is the communication between the community, parents, and school staff. The thing she loves the most about Ninnekah Public Schools is the fact that the kids will make sure to do what's best for them.

Dustin Tate - Dustin Tate is the School Board President. Mr. Tate grew up going to the First Baptist Church of Ninnekah, which he is still a member of today, and he grew up living in the Ninnekah area. His grandfather was a board member whilst his dad was attending Ninnekah. He has three children who attend Ninnekah Schools. He joined the board because he wanted to give back to the community that has given him so much. During his time on the board he has no specific agenda but to make the best decisions for the students as possible. He believes that Board members should put the students first, district second, & staff 3rd, and professional before personal. He believes that curriculum, extracurricular activities, maintenance, & finance are all important. He believes that right now curriculum is more important than ever due to the loss in education on account of the Covid gap. What he loves most about Ninnekah Schools is supporting and interacting with the students as well as supporting students' growth and well being.

Special thanks to our 2021-2022 Ninnekah High School Student Council for interviewing our board members and writing the above summaries about each.